KAABOO has made a name for itself not only as a top tier music festival, but as an immersive experience for all five-senses. In addition to big-name music headliners, guests will be exposed to cutting edge contemporary art exhibits at ARTWORK; hilarious household name comedians at the seated and air conditioned HUMOR ME comedy stage; enticing culinary and craft beverage offerings at PALATE; a full spectrum of INDULGENCES for which KAABOO has become famous; and the ability to purchase a cabana or day pass to BASK Day + Night Club, KAABOO’s on-site Las Vegas-style pool club. At BASK, guests will enjoy prime poolside panorama of DJ performances from internationally acclaimed DJs including Cash Cash, Cheat Codes, Chromeo (DJ Set), Le Youth, Paul Oakenfold, and more.

“We are excited to continue to grow the KAABOO brand alongside the Jones Family in one of the most incredible venues in the world,” said Jason Felts, Chief Brand and Marketing Officer for KAABOO. “We want to bring what we do best in the festival world and put a Texas-sized spin on it. You won’t find yourself sitting in seats for too long here, because you won’t want to miss a minute of the six-stage action.”

Organized in collaboration with The Jerry Jones Family, visionaries behind the legendary Dallas Cowboys, KAABOO Texas represents the first time a multi-day, nationally recognized, music and lifestyle event has ever collaborated with an NFL ownership group. KAABOO’s distinctive upscale experience pairs well with Jones’ vision for the Dallas Cowboys, which has cemented its status as the highest valued sports franchise in the world. KAABOO Texas will represent both brands’ shared energy, creativity, and willingness to elevate traditional concepts. The Cowboys organization has been on the cutting edge of creating more engaging experiences, providing new and unconventional ways to connect with fans, making the KAABOO brand an ideal partnership.

“We are thrilled to be involved in this revolutionary entertainment event,” says Charlotte Jones Anderson, Executive Vice President and Chief Brand Officer of the Dallas Cowboys Football Club. “It is the first time that our family has ever partnered with a multi-day live event in order for us to offer this market a totally unique experience. The KAABOO brand shares the same energy and innovation that we strive for with AT&T Stadium, and we couldn’t be more excited to combine the magic of sports and music right here in Texas.”

To continue the excitement for the lineup announcement, KAABOO Texas will be hosting a lineup release party tonight, Wednesday, January 16 at Halcyon Coffee Bar in Dallas, TX from 5 – 8pm CT. Media and the general public are encouraged to come, celebrate and get to know KAABOO at the event. Music will be provided by Rhett Miller of the Old 97’s, and artist Amanda Lynn will be live-painting a wall mural. The event is free and open to the public.

All KAABOO passes are now on sale at kaabootexas.com. Limited quantities of LONE STAR (GA) passes start at $299, with BLUE STAR and ROCKSTAR (VIP) passes currently available at $999 and $4199, respectively. Passes will move to the next price point once these are sold out. BLUE STAR passes feature premium stage viewing; exclusive culinary options for purchase; private restrooms; exclusive AMPLIFY (VIP) only performances, and more. ROCKSTAR passes include all the features of BLUE STAR, plus access to on-stage viewing; personal concierge access; exclusive meet and greet opportunities with KAABOO performers; complimentary beverages and food provided; shuttle services; and more. For those looking for an entirely immersive experience, KAABOO offers the ULTIMATE HANG pass. Get the full scoop at kaaboodelmar.com/ultimate-hang.

The KAABOO Kindness program continues to support charities in the Arlington, TX region and across the globe. A portion of proceeds from KAABOO Texas passes will be donated to featured charitable partners including global partner The Recording Academy’s MusiCares program, as well as three local charities including North Texas Food Bank, Texas Wildlife and Park Foundation, and Texas Music Foundation. 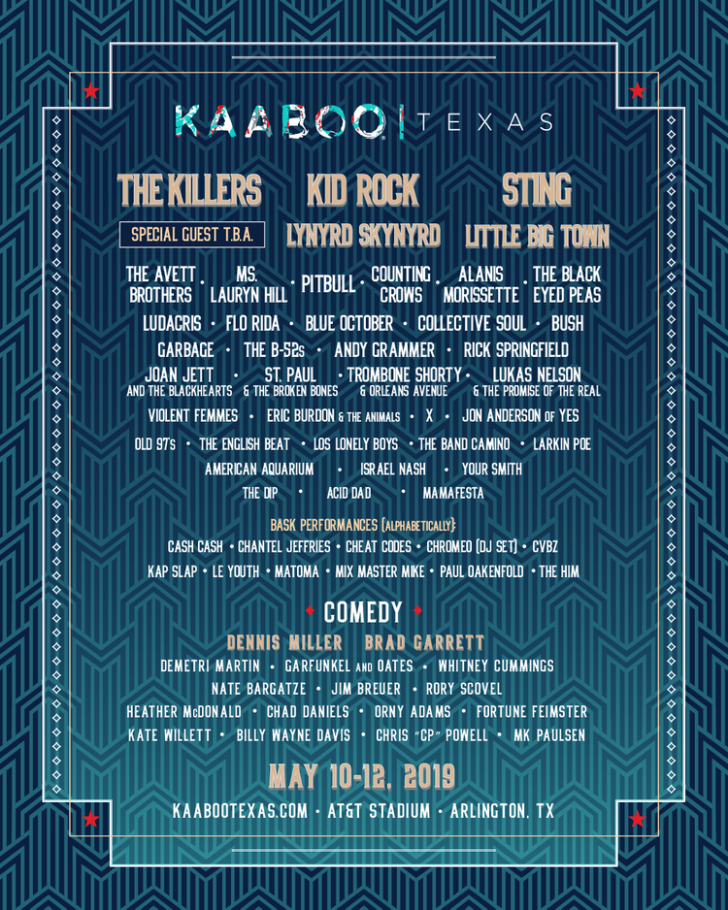